The video drop made good use of the steam rolling from a fun Tonight Show Starring Jimmy Fallon appearance earlier in the evening. It gave fans the gift of more captivating visuals to accompany songs from the album they’ve already come to love. While the third video release from their latest EP isn’t a departure from the sensual afro-futuristic aesthetic of its predecessors, we are transported to an entirely different world — one where our sirens are the undisputed subjects of worship and self-love.

The video opens panning the splayed electrical cables of a damaged intergalactic laboratory. Chloe x Halle are center stage; pulsing to the beat as a sort of mesmerizing and sentient artificial intelligence experiment gone wrong.

The motif tracks with the lyrics of the song; the message of which is one of someone bored with the trivial leanings of an insecure would-be suitor.

In this world, Chloe and Halle are both powerful celestial beings urging the listener to get back to them when they’ve stopped “playing silly games” and learned to embrace their imperfections. Themes of restriction and brokenness play out visually alongside those of elevation and deification with a measure of raw poise and regality that only Chloe x Halle can bring to life.

Remarkably, the set design and wardrobe for this project are still among the best assembled for any mainstream U.S. artists in the last few months; truly only rivaling their own recent works.

They continue to play with textures and creative angles that deliver more shots of their signature latex-clad synchronized body roll; and add beautiful frames expressing the spirits of their separate deities. Chloe takes on a strong and confident deity with visual nods to the Hindu goddess, Durga. Halle embodies an ethereal goddess of love bearing a crown of light. Each individual depiction layers the video in ways that are asymmetrical and still complementary; which continues to be a strength of their well-honed aesthetic.

Overall, the video works well in concert with the message of the single itself:

You can only really give love once you have learned to love yourself.

With the art direction stemming from the album thus far, no one would be upset if every track got some type of video treatment. But diehards be aware: It won’t be long before other projects mark an end to the Ungodly Hour visual era. For now, Chloe x Halle and their fans should celebrate what many would call a flawless media run for a great album and cohesive musical moment.

What did you think of the “Ungodly Hour” music video? Sound off below! 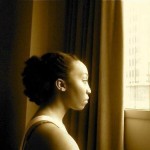