When Master of None released the now-revered “Thanksgiving” episode, I was fresh out of high school, finally ready to embrace my Black queerness. Before that, I didn’t even know any queer Black figures aside from RuPaul, and definitely not any women.

From 2017 to now, I grew up to identify as a lesbian while still having to really search for any semblance of Black, queer, female representation. Particularly representation that was significant in its portrayal of the confusion, fear; and above all, the innocence that Black girls often have taken away from them. Recently, I found it in the new Netflix show, Never Have I Ever.

Considering my love for this new run of YA, female and/or person of color-driven content, I had high hopes. In high school, I was one of the few queer people in my circle out at the time (regardless of race); but I always felt entirely alone.

“Representation” has become a buzzword to allow for new media to disregard the larger responsibilities they have for underrepresented people.

Never Have I Ever provides a scenario that most Black queer kids do not see in their realities; doing so without using Fabiola as a pawn to fulfill a diversity quota.

Fabiola Torres (Lee Rodriguez) is part of the trio of nerds that also includes the show’s protagonist, Devi (Maitreyi Ramakrishnan), and their other best friend, Eleanor (Ramona Young). We get a sense that they are all nerdy in their own individual ways: Eleanor being a theatre kid and Devi in the running to be valedictorian.

Fabiola is the most classically dorky: obsessed with robotics, and typically wearing polo shirts and khakis.

Getting a glimpse into her life, she is straight-edged and constantly hoping to please her friends and family. When she does question her sexuality, she initially puts it on the back burner in order to get a boyfriend and appease Devi in her scheme to get their group into the realm of popularity at the start of their sophomore year.

During my sophomore year, I faced the same issue. While trying to focus on building my resume for college and curating crushes on all the boys I was told were hot; I pushed my thoughts of having crushes on the girls in orchestra or tech crew aside. Once we see Fabiola give that iconic lesbian gaze from across the room at fellow classmate Eve, I felt like experiences like mine were finally given a platform.

Here, Fabiola gets her own storyline. She takes control of it, and has to internally struggle with maintaining her calculated, scientific persona; only first coming out to her man-made robot she toys with between classes.

There is a longing that we see from Fabiola to simply be understood. Her friends want her to have a boyfriend — as does her prim and proper mother, who hopes maybe she’ll be more feminine. She is the only girl in her robotics squad; and when Eve finally does invite Fabiola to a LGBTQ+ volunteering event in an effort to reach out, Fabiola gets defensive.

As Black women, there is an expectation that we silently carry our burdens and help others out first.

Adding queerness to that complicates our expected role. Coming out to a Black family — who already understands how laborious existence itself in society can be for our race — is extremely difficult. Because coming out only adds to that target on our backs, this fear closets so many Black women. This is why Fabiola is a character that demonstrates the kaleidoscopic nature of being a burgeoning young, queer Black woman that has all of these factors holding her back.

In Episode 7, Fabiola comes out to her mother in an unexpected way. The friend group meets at a bake sale with all of their mothers; including Eleanor’s, who left her as a child to embark on her acting career. Fabiola’s mother mentions she’s glad their family is “normal” in comparison.

This idea of normalcy scares Fabiola.

She believes that coming out will not only affect her, but become a burden to her mother and their family. She previously tried to plan her coming out, even sitting her family down; however, the show depicts the way it happens for most of us: We plan and calculate when would be the right time, and there never is a right time until it just falls out of our mouths.

As someone who had a similar journey with my sexuality, what struck me when Fabiola finally came out was her mother’s unfaltering support. She asks Fabiola if she was trying to tell her for a long time; and acknowledges that for her to hold it in for so long must’ve been really hard.

Most queer kids of color are not given that same compassion. For us, coming out is often in the context of adding more hardship to our lives.

Never Have I Ever provides a storyline in which Fabiola takes her coming out into her own hands; allowing her to be scared, angry, and introspective while doing so. She’s only met with her patient mother, who doesn’t center herself in Fabiola’s story and is a willing supporting role.

This isn’t to say that this “representation” is perfect. Fabiola’s crush, Eve, is white; and Fabiola comes from a mixed-race family. I have trouble thinking of any young Black lesbian love shown on any screen; possibly aside from Queen Latifah playing Cleo in the ‘90s movie Set it Off. Even then, her girlfriend had no lines so there was no depth. We still haven’t seen two young Black girls learning about one another or experiencing young love on-screen.

Ultimately, this isn’t a Black queer storyline that is based in any kind of trauma or pain. It centers a young Black woman and her anxiety without any catch-22. Her mom holding her after she comes out shows other young girls in the same situation that we do, in fact, deserve patience and compassion; and that our identities are not weights for us to bear on our shoulders.

Nia Tucker is an undergrad at Emerson College studying Writing, Literature and Publishing.  You can find more of her work — personal essays and race-related features — at niatuckwrites.wordpress.com. Her unfiltered thoughts are on Twitter @nee_yahh.

Related: Let’s Get Real with The Thing About Harry 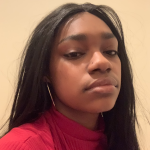