As a woman of color growing up in a white world, watching white media and occupying white-dominant industries, despite the gates built to keep me out; made me hate a lot of things about myself as a child — but none so much as my hair. It wasn’t just the dry, frizzy, unkempt curls that grew out of my head, though that did take a great deal of my self-hatred. It was also the hair that grew everywhere else; from my dark, hairy arms and legs to my thick sideburns and eyebrows I’d inherited from my dad. None of this made me seem desirable or beautiful to my classmates or in white spaces that value hairless, light-skinned bodies. Not when features like mine have traditionally been prominent in BIPOC communities, long considered alien, foreign — or, if romanticized, “exotic” in the wake of whiteness.

All this hair never seemed to affect the white blonde girls I knew at school. At least, not in the same way. While I walked around with arms that made me feel like they once belonged to Bigfoot, blondes could hide beneath their light colors everywhere on their bodies. As young as nine and ten, I remember having conversations with my fellow BIPOC classmates about whether or not to shave our arm hair (because an Afro-Latina girl in our grade had), whether it would hurt, what the boys would like best. Even things as seemingly inconsequential as my sideburns and overgrown eyebrows became part of everyday lunch conversation because I’d noticed most girls didn’t have them and wondered what had gone wrong with me.

I was already internalizing the backwards beauty standards and messages about my body that the white patriarchy wanted me to hear.

The early-2000s American media I consumed featured leads that were white and BIPOC who were made into stereotypes or punchlines. I didn’t know yet that Latinx and Black women are especially prone to thicker facial and body hair, even more so than their white peers. I was even mortified by one of my few Latina heroes, Frida Kahlo, who in her lifetime had long understood the politicization of hair on BIPOC; especially women of color in the Latinx community. Transforming her unibrow and mustache into a sign of defiance rather than conforming to the white male gaze has since made her a cultural icon among Latinas. However, it’s also true that, because beauty standards are so ingrained in whiteness, hair on women of color can never just be a personal choice but also a political one.

Still, at the time, the one thing I had going for me was the hair growing out of my head; which up to that point had been light brown, stick-straight, and just like everyone else’s. I may have had darker skin, thicker eyebrows, and hair on my upper lip beginning to grow and throw an unwanted shadow on my face, but my hair was my one claim to “normalcy.” A few years later, at twelve or thirteen, puberty really happened. Without warning, my texture transformed into 2C/3A curls, seemingly overnight. Even though my mom has the same hair type and went through the same sudden experience as a pre-teen, I had no idea how to manage it.

More importantly, I didn’t feel like trying because no one, whether on-screen or in my community, had the same hair type and was valued for it.

All the way up to my first year of college, I went through phases of air-drying my hair into a frizzy mess like Anne Hathaway in The Princess Diaries pre-makeover; straightening it into submission after a shower and every morning to re-touch; and getting Brazilian blowouts, an overpriced and hours-long procedure guaranteed to keep your hair straight for three months. Even going to the salon for a simple cut made me anxious because no one could figure out what to do with my hair either, except to cut the dead ends that had been fried so regularly and often without heat protection spray.

For more than five years, subscribing to ideals of white beauty as a woman of color cost me more than just a simple rejection of my genetics. In every way — emotionally, physically, financially — I was drained and exhausted beyond what I ever thought possible. All from adopting this hatred for myself because so many of my features weren’t shared by the white American people I knew and shared space with, who could grow out something as simple as armpit hair and be labeled “revolutionary” instead of being compared to primates.

This is especially true for Black women, who often can’t wear their hair in any style without being sent home from school, denied a job, or treated like a pet by another person who claims the right to touch their hair without consent.

As a non-Black mixed-race Latina, my hair is nowhere near as politicized, and in many spaces, it’s a privilege to have hair like mine. At some point before going off to college, I decided to give my hair a chance to breathe. I talked with my mom, who shares the same hair type, and researched the Internet for people on their own hair love journeys. I cut out the heating tools, the straightening products, and the sulfate shampoos in exchange for curly-friendly serums, wide-tooth combs, cold shower water after conditioning, and protective braiding techniques at night.

Not only was it costing me less financially, but seeing the potential beauty of my hair, watching it grow healthy from care and tenderness rather than resentment, gave me the strength to love what I had all along. And only then did it stop being a source of insecurity and shame. Granted, it’s still difficult to contend with sometimes; especially if the weather isn’t right or when my Instagram pictures with my straightened hair get more likes and compliments than those where I’m wearing my natural hair.

And sure, I shave my mustache, thread my eyebrows, and straighten my hair on some special days (maybe we’ll talk about why natural hair isn’t considered glamorous enough for dressing up another time). But I also keep some of the other body hair that’s caused me especially harmful embarrassment in the past. I now claim it happily because a big part of this journey has been understanding that beauty is beyond what white people’s standards would have us believe.

The point is that how I wear my hair in any place is now my choice; not an obligation or subscription to a harmful ideology or desperate measure to feel loved.

Everywhere on my body, my hair is defiant. It’s dark and thick and hairy, yet sensitive. It frizzes and loses its curl if it doesn’t dry properly or if the air becomes too windy, too humid, too rainy, or too dry. It takes me hours to get the locks to sit just right. I use more bobby pins and rubber bands than any person you’ve ever known. It’s been carried throughout my mother’s family across borders and generations and skin tones and genders. I feel more myself wearing it than the cutest piece of clothing in my closet.

It’s beautiful hair, and I’m happy, finally, that it’s mine. 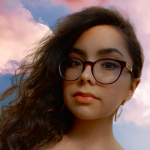